The store will not work correctly in the case when cookies are disabled.

Hindu culture is one of the most influential and oldest religions in the world which has its prominence throughout the globe. One can witness the presence of Hindu gods deities in the different corners of the world which has created a long-lasting impact on the hearts of beholders. There are innumerable deities of Hindu gods which are installed in different countries including India. These statues can be seen in various shapes and sizes from small to large and even very giant. These statues are built to show gratitude towards gods who fulfill our desires and protect us from negative energies.

If we talk about Hanuman who is the beloved disciple of Lord Ram, lays the example of a strong personality empowered with great strength, positive spirit and fearlessness. There are a number of prominent Hanuman statues in the world which are enlisted in the category of tallest statues. Some of them are:

It is said to be one of the tallest statues of Hanuman which is situated near Madapam. The approximate height is said to be 176 ft which is the tallest. The statue stands on the banks of the river Vamsadhara towards North Andhra.

Madapam is a village settled in Narasannapeta Mandal in Srikakulam District of Andhra Pradesh State, India.

The state of Andhra Pradesh flaunts the second tallest statues of Hanuman, Paritala Anjaneya Hanuman. The statue is 135 ft tall located in the village of Paritala 30km away from the city of Vijayawada. The statue is made of concrete.

Installed in 2003, the statue also known as Veera Abhaya Anjaneya Hanuman Swami stands in the Paritala Anjaneya Temple which is at its base. 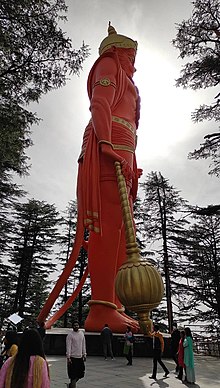 The next statue in the category of tallest Hanuman statues is of Damanjodi in the state of Odisha. With 108'9 ft the statue takes the third position as first two grabbed by Madapam Hanuman Statue and Paritala Anjaneya Hanuman.

The statue displays the finest sculptures of that time which is extremely stunning and makes us proud to possess such belongings as an asset of our country.

The exquisite state of Himachal Pradesh is loaded with heavenly beauty which is flawless. The state possesses one of the tallest Hanuman statues which is Jakhu Shimla Hanuman Idol with 108 ft built near Jakhoo Temple in Shimla. The statue is located on the highest peak of Shimla, Jakhoo Hill.

This statue is a giant presentation of Lord Hanuman which is all in orange colour representing an orange sindoor. The statue was unveiled in the year 2010.

This is another tallest statue of Hanuman with height 108 ft tall which is installed in Karol Bagh, Delhi. The statue is the centre of attraction for tourists from outside and is a popular landmark for the nearby metro station. The statue stands like a unique idol of Hanuman with a gada on one side and with Shani temple on the left side.

Another remarkable statue of Lord Hanuman is the Hanuman Murti, in Nandura, Maharashtra in India. The statue is 105 ft tall which steals the attention with its marvelous piece of work built at NH6.

The statue is made of white marbles with different colors filled at different places. Not only this, Hanuman Murti at Maharashtra also reserves its place in the Limca Book of Records.

Hanuman statue at Dattatreya Temple at Carapichaima is the famous site and very popular deity of Hindu god in Trinidad. The statue is 85 ft tall which is the tallest Hanuman statue outside India. It is a popular attraction for Hanuman devotees and religious people in Trinidad.

The statues of great Hanuman not only embellish India but also beautify other countries of the world. The statue of Lord Hanuman in the city of Hockessin in New Castle County, Delaware, is the popular tourist attraction in the United States (US). It is a 25 ft statue with weight of around 45 tonnes which was shipped from Warangal, Telangana to Delaware.

The statue displays the immaculate sculpture and minute work which was carved by 12 artisans. The speciality of the statue which grabs the attention is that it is made from a single block of black granite.